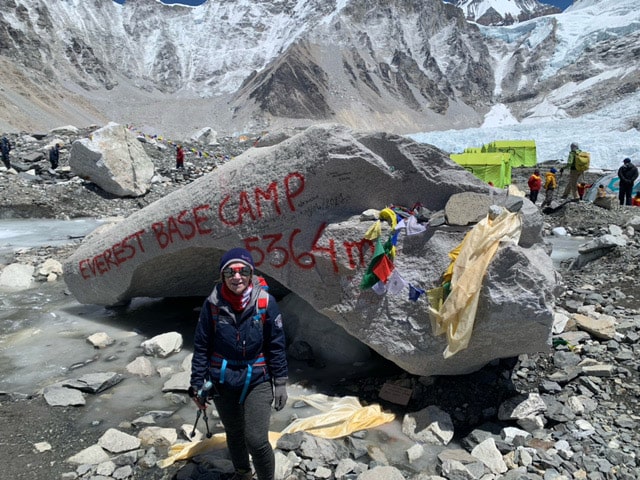 I left Everest without summiting.

Making the decision to leave was heart breaking, painful and one that I thought over very well. I cried a lot in my tent. And prayed.

The first symptom came on while I was having a hot chocolate in Namche during our Trek to Everest Basecamp. The trek was intended to climb slowly and help our bodies acclimatize. But for me it was the start of stomach problems I was unable to recuperate from.

Nine days of trekking proved to be taxing on my body.  I was hit with intense diarrhea and vomiting, even after taking meds, I was not able to recuperate my strength. I became tired, dehydrated and I even managed to humiliate myself days later, during a training session at basecamp, next to the ice fall.

I was unable to control myself and I couldn’t take off my harness in time. I had never been so embarrassed in my life. And still, I had to smile and pretend nothing happened. I bet that’s not what you hear every day about climbing or see posted on Facebook.

Everest is not a normal mountain. It’s the highest, but not the most beautiful in my opinion. At least not from the South Side (Nepal).  The ice fall, and more so this year, required very technical climbing skills. There were fewer ladders, and the route long from basecamp to camp one.  There were some issues as well from camp one to two. There was a lot of vertical ice ascending this year. There were pitches your average mountaineer would find very technical.

That day I thought my stomach was feeling better, but about 30 minutes later at the crampon point (location on the ice where we put crampons on), I needed to go the bathroom. I thought it was a good place to do so since there would be no other safe place to do it. Done. I was still feeling good.

I continued on. After few accents, more climbing, more ascending, waiting in line, more ascending, I heard our lead guide’s firm voice over our radio telling us to duck. I quickly looked up and saw a white power cloud coming towards us, as a serac fell and collapsed into a crevasse, thankfully. Then I need to go to the bathroom again!

I think it was about this time that I lost sense of time and where I was. Against my guide’s advice, I took my harness off and hid behind a rock to relieve myself.  Yes, I could have fallen into a crevasse but all I was thinking at that moment was going to the bathroom.

There were so many people on the ropes and path. People were no longer climbing and enjoying the trek. Everyone was trying to get ahead, to move and not fall, to get ahead of the person in front of them. It really was each for their own. Climbing the ice fall is the wild west. There was a traffic jam of climbers, trying to prove they were tougher than the abyss of crevasses and slippery floors. All trying to race against the mountain.

Fischer, my guide, kept asking if I was ok. He was worried about my bathroom breaks. I eventually admitted I was suddenly cold, even though we had just finished a rope ascent. My guide then suggested, with my condition, we should turn back while I had the strength to descend.

He communicated with our lead guide Jacob via radio, and that is what we do.  Trying to descend when there is a caravan of people going up and only one rope was pretty hard. The route down is harder than up.

For many pitches, Fischer was my human anchor. I was thankful for the high caliber of mountain guides Mountain Trip employs. I felt safe.

I was so weak.

When I got to my tent, I cried. I had let everyone down.

In all my other climbs, I felt Jesus was pushing and pulling me up and down the mountain. Not this time. Even though I begged, I felt I was walking through a soulless place. I thought about all the souls of climbers that died on Everest and were never found. Perhaps this is why it felt soulless.

The next morning, my guides suggested we could go up the next morning to meet the rest of the group at Camp One. I wasn’t far behind the schedule. They even offered to get a Sherpa to take my pack, so I could conserve my energy. Other climbers had taken advantage of it the day before I was told. Ultimately it wasn’t the 14 pounds backpack that was the issue. My body was weak after almost 20 days of passing gas, pain, cramps, diarrhea, bloating, lack of energy, and being afraid of eating.

When I first told my family I couldn’t continue, they tried to encourage me: ‘you are strong’; ‘you have trained so long for this’; ‘you can do it’; ‘we believe in you’ and ‘we are proud of you’. Though I appreciated all their support, I knew I had to stop. I didn’t want to disappoint them or anyone for that matter, but I was beaten. Being on the ice fall felt cold, like a cave in the night, a tomb, and I did not want to die there.

I started climbing the 7 Summits 3 years ago and had done 7 of the 8. Everest was my final summit to complete both Messner and Bass versions of the 7 Summits. I had always enjoyed the climbs. Reaching the summit at each mountain had only been a bonus. I found myself in these climbs and enjoyed what the mountains have taught me.

I was on the mountain to raise awareness for and end the stigma of Mental Health on behalf of Peaks for Change Foundation. It would have been hypocritical for me to try and continue this climb when my body was telling to stop. So instead, I let go of my ego for the safety of myself and my guides who would have done anything to keep me safe.

So, in spite of all the encouragement of my daughters and friends, and the Plan B, C and even D of Mountain Trip guides, I made the decision that climbing Everest on the south side was not for me. Maybe one day I’ll attempt the Tibet side, which had been my original plan pre-COVID, but not now.

The icefall frightened me to the bones. I believe my stomach problems were Jesus’s way of telling me I was not meant to climb Everest, this time around. It was his way of keeping me safe, because once I decided to come home, a warm feeling washed over me.

It took quite a while for me to feel any better. I had been incredibly sick, and the antibiotics didn’t help hardly. I could barely eat.

Nepal, despite the famous photos of long line-ups of climbers standing still on the way to the summit in 2019’s deadly season, had issued 381 permits. This was more than in 2019 and a record number of permits!

I wished my remaining team the best and hoped they would be protected by God on their continued journey.

We are a volunteer organization of individuals who want to have an impact on mental health by providing funds to specialized organizations with expertise in the mental health area, with an aim for permanent change.